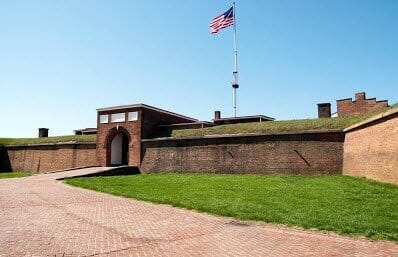 The existing mechanical cooling and heating system in one of the buildings at Fort McHenry, a Historic National Monument, consisted of an oil-fired hot water boiler, hot water piping distribution system with base board radiators and fan coils. The boiler additionally provided heat for the domestic water heater. Cooling was provided by window units and a manually controlled exhaust fan served the two bathrooms. Due to the age and historic significance of the building, the customer did not want to install a traditional cooling and heating system which would mean significant disruption to the building and its occupants, so GMS was brought in to design and build a complete variable refrigerant flow (VRF) system to provide cooling and heating to the building. The new system from Mitsubishi was comprised of multiple indoor units, a refrigeration distribution system, an outdoor VRF condensing unit and controls. The goal was to give the occupants the ability to control the temperatures within their own areas rather than having it set for them. Additional benefits of the new system include: